The long-awaited data on the April inflation in the EU certainly allowed Mario Draghi to exhale with relief. The indicator (naturally, on an annualized basis) increased from 0.5% to last months 0.7%, which allows the ECB to not undertake further stimulus measures, whether lowering rates or purchasing securities. Despite the fact that the statistics are expected at 0.8%, today's figures may well satisfy the ECB.

Previously all of the threatening rhetoric from Mario Draghi was an extremely important caveat that the regulator is actually ready to take action, but only in the event of further deterioration of inflation. But if in the coming months the figure does not continue to grow, and, for example, once again falls back to 0.6% or 0.5%, then the ECB will have to take retaliatory steps. However, it is all so far based on assumptions.

Consequently, if at the next meeting of the ECB the monetary policy will not undergo any changes, then the Eurodollar will gain good momentum if at least for local growth. The bulls received additional support after the publication of data on the reduction of unemployment in Spain from 13% to 12.7%. In addition, the positive dynamics of the French consumer spending has also become one of the drivers of today’s growth.

However, the most reliable supplier of good news for the euro remains Germany. On Wednesday it became known that the unemployment rate is declining for the fifth month in a row, remaining at historic lows of 5.1% (less than half compared with the pan-European index of 11.9%). The negative news was the drop in retail sales, but it was an anticipated event, although the growth of the Eurodollar was of course, restrained.

If the market will once again reach the test mark of 1.39, the European capitals will once again make noise about the relatively expensive euro. The fact that the source of growth for the vast majority of countries in the EU remains their exports, a problem arises at a higher exchange rate. Earlier Mario Draghi has spoken on this subject, and promised to help if the euro continues to strengthen. 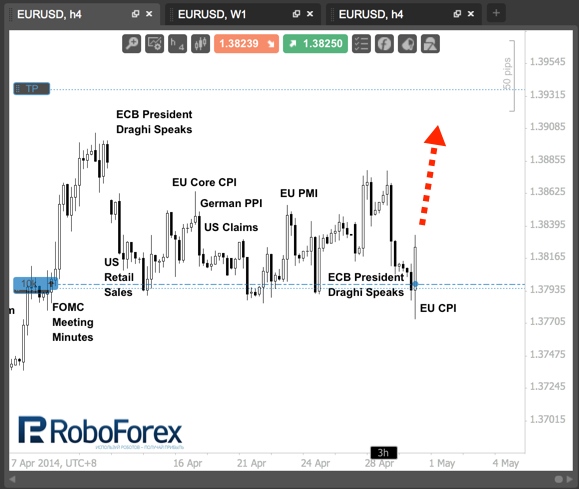 On the news release for European inflation I bought the currency pair, and the subsequent growth allowed putting a stop to breakeven. In the evening weak data on U.S. GDP growth in the first quarter is expected. According to preliminary estimates, the U.S. economy could only gain 1.2% due to the cold winter. The "highlight of the program" will be the Fed meeting, which may again "cut a piece” from the QE3. This event is expected; therefore the market is unlikely to react to a sharp strengthening of the dollar.
Back to list
Attention!